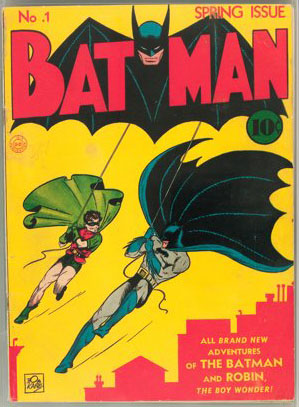 Batman #1 (DC, 1940) UNRESTORED White pages. The “white pages” here are the real deal — no surprise since this copy has been stored less than 150 miles from the Arctic Circle (more on that below)! It is rare to see an unrestored copy certified with pure white pages. And note that just 18 unrestored copies have been certified with a higher grade (as of this writing).

This issue continues to be one of the most desirable comic books in the hobby. It’s got the first appearances of two absolute “household name” characters, the Joker and Catwoman. We’ve heard the case made that Batman #1 should be ranked ahead of Superman #1 in value and behind only Action #1 and Detective #27.

Swinging into action for the first time, in their own title, the Dynamic Duo cut striking figures as they whip across the (soon to be named Gotham) skyline. One of the most desirable comic books in the hobby, and currently #6 on Overstreet’s Top 100 Golden Age Comic Books list.

The classic (and much-imitated) cover is by Bob Kane and Jerry Robinson.

This copy hails from Fairbanks, Alaska, and it has a colorful backstory: A private individual who was buying used furniture at garage sales around town bought an antique dresser in 1974 that he decided to refurbish for his own use. During the work he found the glide bar for the bottom drawer had been replaced with a sheet of plywood. Under the plywood he found three comics that appeared to be spacers so that the drawer would operate correctly, or perhaps the drawer was meant to be a false bottom. At any rate, the new owner of the desk placed a classified ad offering the Batman #1 for sale for $500. A gentleman bought it at that price, and the comic has remained in Alaska until now. And here it is!!!

A desirable copy of one of the most sought-after books in the hobby.

Did I mention, Joker’s FIRST appearance is in this book. Joker is considered the ultimate villain of all villains.